The Essen Internationale Spieltage 2018 will be the opportunity to publicly show for the first time the second expansion for Magic Maze: Hidden Roles. It consists of a simple deck of cards that will bring complex interactions between players. Each player gets one card at the beginning of the game: Will you be a hero, trying to get the items and run to the exit, or a traitor subtly trying to make the heroes fail? You might also get a special mission to complete, or a special rule to follow – and any of them might lead you to make suspicious moves… 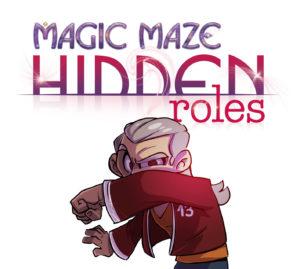 In a similar way as the “Do something!” pawn that made the success of the base game, the “I’m watching you” card will allow you to silently discuss the roles before making a precipitate accusation.
Hidden Roles brings a whole new dimension to Magic Maze, where you need to find who the traitors are, or avoid being accused. But without extra discussion allowed, you can only lie in action!

The mass production of this expansion hasn’t started yet, but we were so excited about it that we decided to bypass the time needed for a traditional mass production, and locally produce a limited number of them (300) ready for you at Essen, so the biggest fans can enjoy it immediately. They will be presented as a plastic-wrapped deck of cards, without any box.

We use cookies on our website to give you the most relevant experience by remembering your preferences and repeat visits. By clicking “Accept”, you consent to the use of ALL the cookies.
Cookie settingsACCEPT
Manage consent

This website uses cookies to improve your experience while you navigate through the website. Out of these, the cookies that are categorized as necessary are stored on your browser as they are essential for the working of basic functionalities of the website. We also use third-party cookies that help us analyze and understand how you use this website. These cookies will be stored in your browser only with your consent. You also have the option to opt-out of these cookies. But opting out of some of these cookies may affect your browsing experience.
Necessary Always Enabled
Necessary cookies are absolutely essential for the website to function properly. These cookies ensure basic functionalities and security features of the website, anonymously.
Functional
Functional cookies help to perform certain functionalities like sharing the content of the website on social media platforms, collect feedbacks, and other third-party features.
Performance
Performance cookies are used to understand and analyze the key performance indexes of the website which helps in delivering a better user experience for the visitors.
Analytics
Analytical cookies are used to understand how visitors interact with the website. These cookies help provide information on metrics the number of visitors, bounce rate, traffic source, etc.
Advertisement
Advertisement cookies are used to provide visitors with relevant ads and marketing campaigns. These cookies track visitors across websites and collect information to provide customized ads.
Others
Other uncategorized cookies are those that are being analyzed and have not been classified into a category as yet.
SAVE & ACCEPT
Powered by